more about stories children tell, how and why they tell them
the day the soldiers came
children of war, when safe in shelters and camps, may express themselves well therapeutically through art,
"telling their stories", beginning to describing their terrifying experiences of massacre and loss,
making drawings, paintings, collages, clay figures, murals,and other types of symbolic artwork.
the picture produced by this ten-year-old Syrian boy who was in therapy with one of our Country Directors, portrays
his lived experience on the day soldiers came to his home. He now lives in safety in a Jordanian camp for Syrian children,
but the remaining members of his family were killed that day. Working with art materials and talking about
his memories of that terrible day was part of healing from vivid visual and auditory flashbacks.

Like many other war-affected children, he also wanted the world to see his vivid picture of that experience and not only
understand his experience and his family's suffering, but also understand that despite it all, he still wants to go home to his country.
For those two reasons, he communicated what happened that day symbolically and gave the picture to
his counselor to show to the world.

Often with amazing accuracy, using art materials allows wounded children to express what they've endured literally and carry within.
Expression through art helps them begin to "story themselves", that is, begin the "telling" part crucial to recovering
from severe trauma - doing so by creating an image and sometimes a bit of text, "saying, in pictures" what they have
endured of war trauma, catastrophic injury, revealing details of the killings they have witnessed, revealing the horror
they've been exposed to -- violent pillaging, carnage, tell of the losses they've sustained. . . .
often all too terrible to speak of using words.

But art frees them, as this picture does, and their art often illustrates, in amazing detail, their most
life-threatening experiences and those of their family members: depicting what they still live with in memory --
exposure to shock, intrusion, brutality, violence and pain, torture, killing, the terror of parental helplessness,
-- and that is in some ways the worst, their heart-breaking exposure to their parents' helplessness
​ and inability to shelter and protect them.

beginning to heal
co-creating the new narrative, the transformative tool
bearing witness
The intense drive to "tell" and re-tell in a safe, predictable, secure place, is the beginning of healing,
and by "telling" with a skilled, compassionate listener, the ancient ritual of telling the story in the presence of
another and others who bear witness becomes the therapeutic, transformative tool vital to
the co-creation of a new narrative, -- replacing the compulsive, repetitious "reliving" of the trauma
in nightmares or flashbacks, replacing also the blocking evidenced by frozen, dissociative states.

Children of extreme trauma such as exposure to war, lose, in an instant,
1) ​a sense of the wider world as potentially good and safe.
also, in an instant,
they 2) lose their identities
- sense of being a child in a family, with a parent able to shelter, nurture, protect them.
Finally, they often 3) literally lose that parent to murder or "disappearance",
and, with that experience,
4) lose their own sense of coherence,
their sense of being a viable, "real", intact person.
​They witness interrogations, torture, homicide, experience the unknown of abduction,
loss of friends, pets, schools, playthings, the joy of idle time and imaginative time, their clothes,
other belongings, loss of health, food, gardens, activities
and daily routines, lose anticipated futures, their familiar houses and the warmth of their home life,
their country, their national, family, personal identities,intergenerational linkages, their sense of coherence -
"self"- shattered, -- they lose the sense of "belongingness", --
absolutely everything gone within minutes, hours, paired with catastrophe - overwhelming
traumatic and catastrophic
change, injury, multiple loss within minutes, followed, for many, by disorientation and confusion, chronic
sorrow, chronic terror.
In the remarkable picture above, a young boy has depicted multiple, minute details of how the terrifying
events of war; chaos, loss, life-threatening and life-ending carnage, forced displacement which affected him
within a very short time.
Notice the ambiguity the child is able to represent: in his picture: certain individuals are "taken away",
others are "left behind" without reason, with no clue as to their fate.

In images and texts - in pictures and in stories children tell and write -- we learn to listen and "read"
more deeply, beyond the obvious, beyond words, in order to discern where best to begin to enter
the world lof grief and trauma, sadness, hopelessness,
of an unaccompanied minor, in order to begin to provide a bit of sameness,
constancy, a bit of secure base, a safe haven.

As clinicians, adult "helpers", we look to be a friend, a predictable, trustworthy, caring, protective,
(perhaps clinically skilled) adult individual whom
children and youth can begin to trust hour by hour, day after day. step by step.
Much the same can be said of any good-hearted adult friend, teacher, helper of children -
the same caring and predictability matters, and can be offered
as "everyday constancy" - the closest once can come to the constancy of secure-base parenting.

*part of our Project's contribution is to assess whether a child can benefit from specific intervention for
psychosocial issues or perhaps for deeper psychiatric issues which might be well served by primary
individual or group treatment, or both.

***Interpretive notes:
we would first put ourselves in this picture and imagine what we might be feeling.
we might also notice this immaculate, (perhaps idealized, perhaps not) picturesque house "with the blue doors"
(see the Blue Door section of website).
The huge door knobs or latches, hard to miss, may be hypothesized to serve as a welcome, not to be ignored,
(as they are exaggerated) as designed to welcome, even woo, the observer inside, a cozy fire in the fireplace, pretty curtains
and lovely flowers, welcoming and amazingly positive. All inviting images that this child is able to produce -
suggesting the child wants to emphasize how wonderful his life was, and/or, taken in the present, how badly he
wants the observer to stay and feel welcomed into his story, his life. All theses are hypotheses that we simply hold in mind.
it is wonderful to see that the Red Crescent (Red Cross) is present, but, notice that the workers
do not appear pleased. . .
a child is bleeding profusely on the stretcher, as is the mother on the ground . . . this is a visually appalling,
wildly chaotic and noisy situation, - we know from the data that the mother does not live.
there are bombs, and indications of sounds "like thunder" . . . there are signs in the picture of strong, daring
loyalty and defiance - the child has inserted the Syrian flag flying boldly from the house . . .
​at the same time an incredible amount of pain and brutality are being explicitly recalled and reproduced.

Theoretically, the use of any art form such as this, - - drawing, painting, sculpture, music, poetry, is considered
a way of moving the amorphous rawness of intolerable emotional pain into a kind of structured container that is
more structured, thus more tolerable and can be then be less fearfully approached.
​Another way of saying this is that producing art is cathartic in and of itself, and further, the structured nature of
the finished art facilitates approaching and tolerating working with and processing the traumatic material further.
while . . . Children never forget, the awfulness can be transformed, as --
"Anything can be borne if it can be made a story." (from the Holocaust Literature)
​
children and memory
children may misunderstand or misinterpret, or may repeat events out of sequence.
they may have dissociated during traumatic events, girls more often than boys; younger children more
likely to dissociate than older children, as developmentally, they are even less able, physically,
to employ "fight" or use "flight" (running away) to defend themselves. But they never truly forget.
thousands of infants, children and youth die every day -- they are world's most vulnerable,
primary victims of numerous, simultaneous, between-country, but now largely within-country, ethnic,
religion-cultural, politico-civil wars and armed conflict that characterize the world post World War II.

Founding Board Member of Always Be Listening, Rev. Erik Swanson, holds a reduced version of the above boy's painting which we distributed in the  church bulletin, enabling each member of the congregation to examine it. 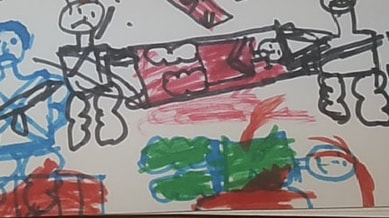 ​Excerpted from the completed artwork in the header of this page, this excerpted portion depicts two people bleeding profusely, one who survived (actually the child artist himself - seen on the stretcher), and one who did not (the child's mother, seen on the ground beneath the stretcher, in a pool of blood).